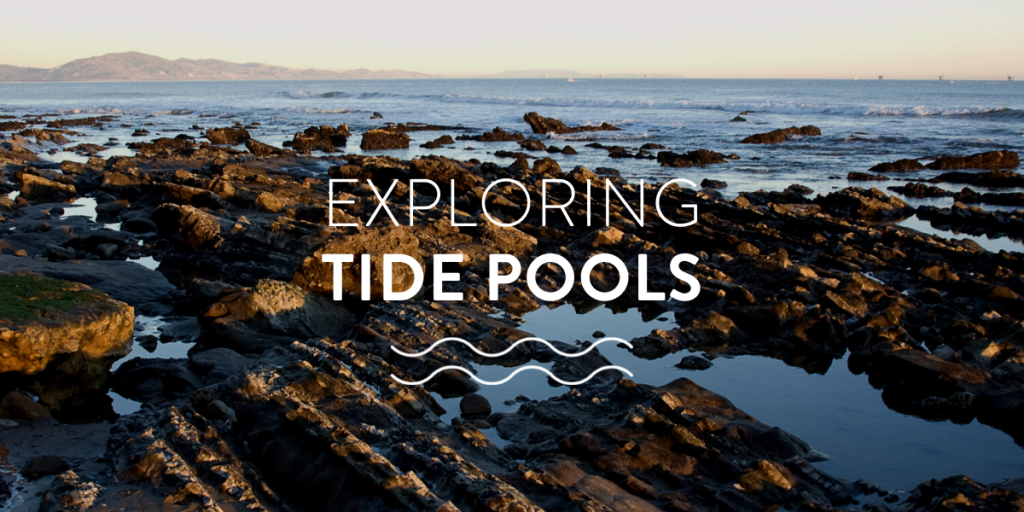 Tide pools or rockpools are formed along the shoreline of rocky coasts in areas known as intertidal zones (where the sea meets the land). Tide pools are usually hidden at high tide, but become separate pools of seawater when the tide recedes and seawater becomes trapped. These typically small pools are packed with sea life, from barnacles and anemones to sea stars, crustaceans and small fish.

They can be super fun to explore for all ages and are a great way to introduce people to the wonders of the underwater world. So let’s dive in to discover what can be found in tide pools and what to consider when exploring them …

What can you find in tide pools?

When you examine a tide pool from the surface down you will see different zones, with different biological life.

Most of the species found within tide pools have to be pretty hardy. During low tide they are exposed to the sun and low oxygen levels etc.. Whereas at high tide they have fresh seawater, but they have to contend with the pounding waves. Most species have special adaptations to help them survive in these environments …

To survive in this rugged environment, Barnacles cling very tightly to any rock to which they can adhere. They produce a natural, fast-curing cement that is among the most powerful glues known to exist. In fact the glue is so strong researchers are trying to figure out how it can be used commercially. Barnacles can also open or close the protective calcium plates that surround them depending on the situation. For example, when the tide is low they close the ‘doors’ to conserve moisture and for protection. However, when fully submerged they open up and have feather like appendages called ‘cirri’ that come out to sift the water for food.

These invertebrates are always popular when exploring tide pools with their bright colours and recognisable shape! They feed on things like micro-algae, bivalves and snails, all of which are available within the confines of tide pool making them a key habitat for starfish. In recent years sea stars have been heavily impacted by sea star wasting syndrome so numbers have declined. This decline has had a knock on impact on the biodiversity within tide pools as many star fish are ‘keystone’ species.

A variety of different crab species are found in tide pools, including hermit crabs, which are technically not true crabs! Unlike crabs, hermit crabs don’t have uniformly hard exoskeletons and can’t grow their own shells. They have a hard exoskeleton at the front, but they have a soft bottom that they protect with the unwanted shells of other animals. These shells not only help protect them from predation, but they can also carry water within its shell. The ‘hermit’ part of their name is also a bit misleading as they are actually quite social. They even sometimes line up next to a new shell, biggest to smallest, to see who fits the shell best then they all switch shells.

The reaching tendrils of the anemone can be fascinating to watch! These ‘flowers of the tide pool’ are filter feeders that catch prey with their tentacles before bringing it to their central mouth. They come in a variety of colours and get their pigment from the marine algae that live within their cells. They have a symbiotic relationship with the algae which gets protection in return for supplying energy to the anemone via photosynthesis.

Keep an eye on the ocean and what it’s doing

Tides are changeable and can take the unaware by surprise, so be sure to research the tide patterns in the area. Also keep an eye out for rogue waves to avoid getting a soaking!

Not only can the rocks be slippery, but you don’t want to step on any living creatures. Try to stick to bare rocks (best to avoid if its green, brown or black) and take your time.

Don’t take anything from the tide pools

As the saying goes take nothing but pictures and leave nothing but footprints! On this point it might be worth taking something with you to clean up any trash you find though.

If you move small rocks or shells around please put them back where you found them. You never know what critters are using them as a home or hiding spot! If you do touch anything ideally wet your hands first and only use 2 fingers for a brief time.

Hope this inspires you to get exploring tide pools to see what you can find in these fascinating mini worlds! Let us know if you have any more etiquette tips we should add too?