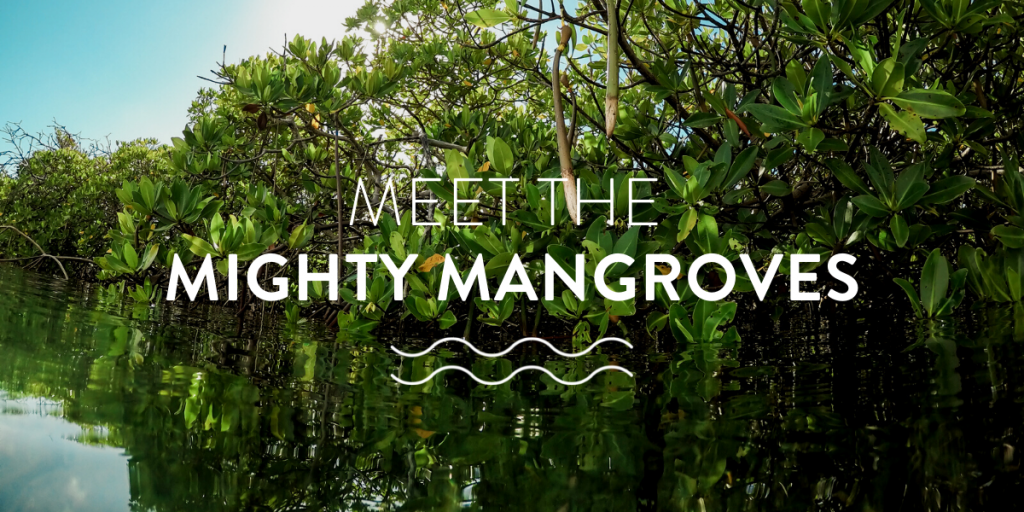 Inhabiting areas that most plants cannot, mangroves are true survivors that should be high on everyone’s list to explore, respect and protect! A mangrove is a woody tree or shrub that lives along sheltered coastlines within tropical and subtropical regions. They are found worldwide, but the greatest species diversity is in Southeast Asia. There are 54-75 species of true mangroves (scientists often differ in what they consider to be a true mangrove). Interestingly, the various species aren’t necessarily closely related to one another. However, all mangroves share the unique capability of growing within reach of the ocean’s high salinity and tidal fluctuations.

Perfectly adapted to their environment.

The waterlogged, oxygen-poor, salty soils mangroves inhabit are inhospitable for most woody plants. Whereas, all mangroves have evolved special adaptations to thrive in these conditions. These key adaptations are salt excretion and root aeration.

In response to having underground roots that are flooded with water up to two times a day, mangroves have evolved special structures to help these roots get access to oxygen in its environment. Similar to a snorkel, many mangrove species have pneumatophores, which are thin structures that stick up from the ground, providing access to oxygen.

There are other roots, such as knee roots and prop roots, that branch out above the water’s surface allowing uptake of oxygen. All these structures are covered with tiny pores, called lenticels, that repel water and allow oxygen exchange to occur.

Mangroves form into coastal wetlands that make up the transitional zone between land and sea, connecting and supporting both. Thus, they provide a unique habitat for an incredible diversity of both terrestrial and aquatic species. Many threatened and endangered species are native to mangrove forests. Mangroves also provide key resting and feeding sites for hundreds of bird species. They serve as sheltered nursery habitat for juvenile fish and invertebrates, many of which move out to the reefs or deeper water as adults and become commercially important for our fisheries.

I highly suggest visiting a mangrove forest (either in person if you are near the coast, or virtually through photos and videos) to explore the incredible diversity within this ecosystem. My favourite mangrove encounters are nudibranchs, juvenile sea turtles and periwinkle snails!

Similar to many other ecosystems worldwide, the services mangroves provide extend much farther than providing a habitat and food source for wildlife. Mangroves are also ecosystem engineers. The intense root structures of mangroves are key to absorbing the impact of waves and storm surge along the coast, which then allows the buildup of sand, dirt and silt particles. The root systems trap these sediments, which improves water clarity and stabilizes the shoreline, buffering wave-induced erosion along tropical coasts.

Water quality is further improved by mangroves because they absorb and filter nutrients from runoff water. Many other ecosystems near the coast, such as seagrass beds and coral reefs, benefit from the improved water clarity and quality these forests provide. If that wasn’t enough, mangrove ecosystems also combat climate change by absorbing and storing carbon from the atmosphere! Let’s hear it for the mighty mangrove forests!

They are under threat and need protection.

Despite the multitude of services mangroves provide, they are one of the most threatened ecosystems in the world. Exploiting mangrove forests will likely lead to great economic and ecological loss. Mangrove deforestation is occurring due to coastal development, shrimp aquaculture, oil exploration and extraction, and urbanization of wild spaces. The conservation and restoration of mangrove forests is essential for the health of the habitats we depend on for seafood, shoreline protection and biodiversity!

We hope this provided a window into the absolutely incredible ecosystem of the mighty, mighty mangroves.

Alexa Putillo is a marine ecologist who currently specializes in scientific outreach, communication, and engagement. She lives in Florida, USA where she spends a lot of time exploring coastal ecosystems through freediving and paddle boarding. Check out her IG @alexaputillo to follow along on her ocean adventures.