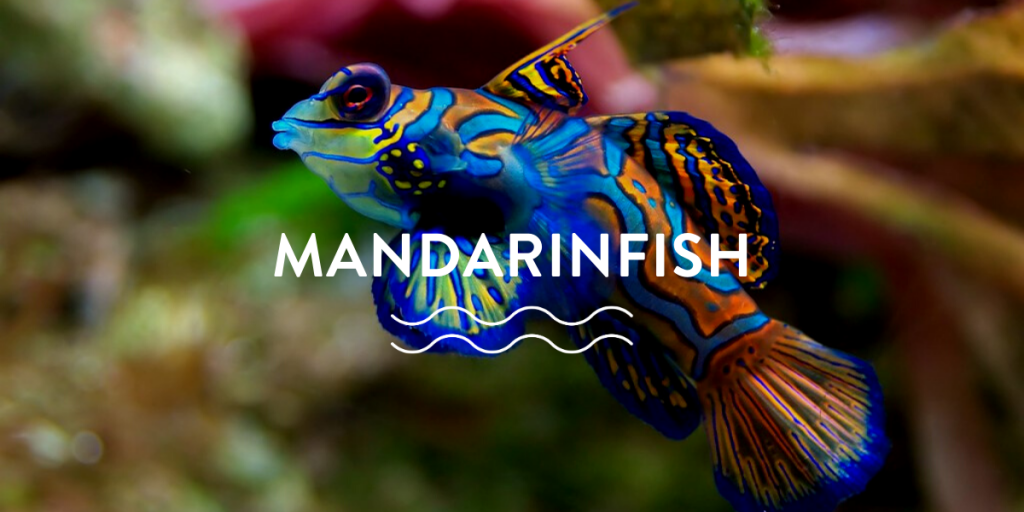 One of the most elusive yet brightly coloured of all fish, they are a kaleidoscope of blues, greens and oranges! Mandarinfish are a part of the dragonet family. Their species name Splendidus is from the Latin for ‘bright’ or ‘glittering. They are commonly known as the Psychedelic Mandarinfish because of their extremely vivid colouration, evoking the robes of an Imperial Chinese Mandarin.

There are two colour variations, the red and the green, which sport slightly different colouration on their pelvis. The red mandarin has red in place of orange and in some rare cases is all red with black stripes!

Mandarinfish are native to the waters of Southern Japan to Australia with particular abundance within the Coral Triangle. They are reef dwellers, prefering sheltered lagoons and shallow reefs close to shore. In North Bali, Pemuteran it is most common to see them at muck diving sites where there’s sand, staghorn coral patches and rubble. They use these spaces to play hide and seek with any potential threats.

Ocean Mimic chose the mandarinfish to be one of the mimic suit designs because they are quite simply stunning. Here’s what Emma had to say:

Mandarin fish are so unbelievably stunning! I was lucky enough to see a mating ritual in the Philippines and ever since they have remained my favourite fish!

They patrol their home ranges hunting selectively for small worms, crustaceans and protozoans on the sea bottom. While they are slow swimmers and practically fluorescent, they are elusive and fortunate to spot due to their bottom-feeding habit and small stature (reaching only about 3 inches or a fingers length).

Mandarinfish have large pelvic fins that they can activate to use for ‘walking’ along the seafloor. Another defining fin feature is their dorsal fins. In males the first fin behind their head is exceptionally long. This obvious sex difference is known as sexual dimorphism. Which means there may be competition amongst males to grow the longest dorsal fin to attract a mate. Swit swoo! More about their mesmerising mating ritual later.

Unusually Mandarinfish do not have scales like most fish! Instead they secret a very smelly mucus layer for protection against the underwater elements. Interestingly, it is not only a stinky slime they produce, but they also secrete a toxin to protect them against predators.

Their dramatic colouration serves to illustrate its unpalatability and toxicity. Known as aposematism, bright colours serve to act as a warning to predators that they are toxic to snack on. It works in both parties’ favour to avoid a feasting scenario, as both prey and predator get to live another day.

The psychedelic mandarinfish is one of only two vertebrate species known to produce its own blue colouring because of cellular pigment.  The other being the closely related picturesque dragonet. This fish has a paler complexion with what appear to be eye spots. Possibly functioning as false eyes to evade a fatal attack from a predator, or just a truly funky pattern!

The mandarinfish is most famous for its distinctive mating ritual. Under the dimmed light of sunset hours, mandarinfish couples perform an extraordinary courtship dance. Females gather at the reef, judging if a male is worthy. A male who has successfully courted a lady attaches to her at the pelvic fin. Then the pair swim up from the reef towards the water’s surface, releasing a cloud of sperm and eggs (around 200 eggs).

Unfortunately, these magnificent fish are highly sought after for the tropical fish aquarium trade. Their beauty makes them highly prized; an individual can sell up to $150 USD. However, it has been proven that mandarinfish live up to 4 times longer in their natural reef habitat than in captivity, so saltwater aquariums do not serve as an adequate second home!

Emily Jupp is a Marine Biologist and PADI scuba instructor from the UK. Passionate about living sustainably, keeping plastic free and caring for coral reefs. Follow her story @green.conch